Check out our story: 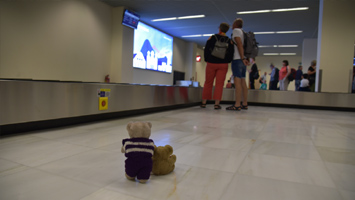 This summer we went to Crete in Greece. Crete is a large island in the eastern part of the Mediterranian Sea and it's 160 miles from east to west. Here we are having arrived Hania Airport just outside Hania. We picked up our luggage, our car and went to our hotel

In 2017 we went to Idaho in America to study the Solar Eclipse. This year we were going to Crete to study the Lunar Eclipse on the 27th August. 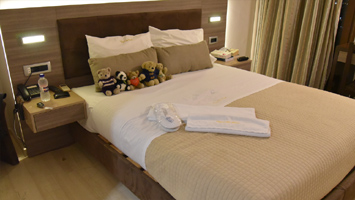 We would be staying at different hotels. The first couple of days we were staying at the Royal Sun Hotel just outside Hania. 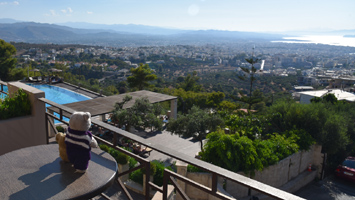 We enjoyed the views from the Royal Sun Hotel. Hania with 54,000 citizens is the second largest city on Crete.

The next morning we went to Falasarna on the west coast. Here we had our first encounter with Greek Salad. It was a lovely lunch.
Tom noticed the beach was a bit stony.
"Yeah, well, it's not exactly soft here." McBear agreed. "We are standing on a rocky stretch, but the people behind us have nice soft sand to walk on." McBear agreed 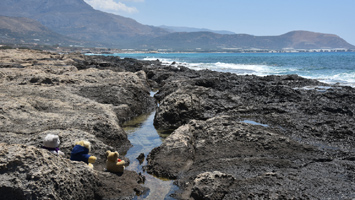 We went around to study how the rocks had been eroded over time and it was like walking in a landscabe of canyons. 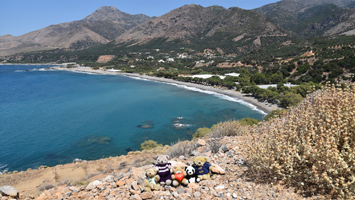 The next day we went to Sfinari about 20 km south of Falasarna on the west coast. Sfinari is less visited than Falasarna, so we had the beach more or less to ourselves. 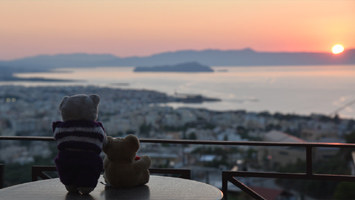 In the evening we enjoyed watching the sunset from our balcony at the Royal Sun Hotel. We were looking forward to witnessing the Lunar Eclipse next week...

Then we left Hania and went over the mountains down to Agia Galini on the south coast. 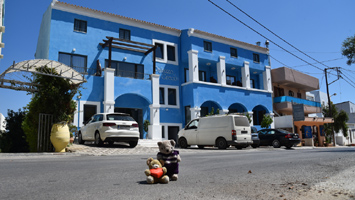 We stayed at the Palazzo Greco. 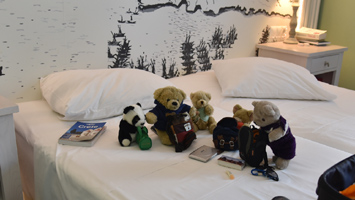 We unpacked our gear. Roger emptied his back pack. He had brought a pile of Travelling Bears business cards.
"Now, just remember to hand out cards this time - unlike in Chicago." McBear reminded Roger.
"McBear, please! You are stating the obvious!" 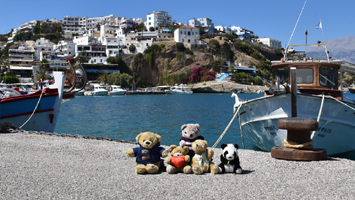 Wow, Agia Galini was a real cliff hanging town with hotels up the cliffs and restaurants down the cliffs. It's a small town with just over 1,100 citizens, however, in the summer time the number can more than double up. It's a fishing village, so if you're eating out, you should try fish... Roger, as a polar bear, loves fish, and McBear loves smoked salmon. 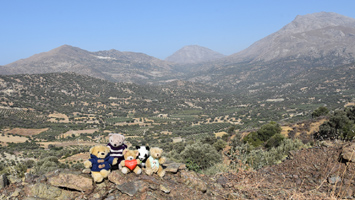 One of the days we left Agia Galini and went to the Amari Valley. The valley has beautiful landscabes and tiny villages and is not overrun by tourists. It's more like the traditional Crete. However, if you decide to go, beware that some of the roads are high up in the mountains, and you should bring a good map. 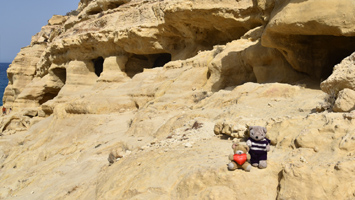 We also went to Matala to see the caves, where humans had lived both in ancient Roman time as well as modern times, when the hippies in the sixties and seventies occupied the caves.

Matala is a very popular tourist resort with hotels and bars and restaurants. This was Olivia's second time in Greece after Skiathos in 2008. It should have been Tom's second time as well, however, one of our humans had forgotten to put Tom in the suitcase, so Crete was in fact Tom's first visit to Greece. 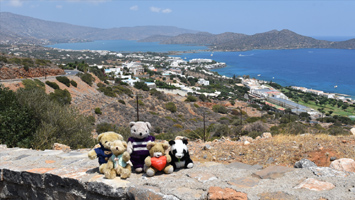 Read the second part of our trip to Crete.

Check out the map of Crete